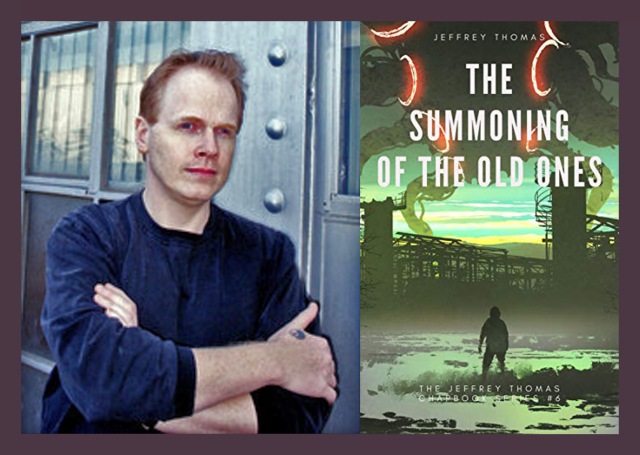 Three stories, originally published separately, brought together for the first time…to detail the summoning of a god-like entity from beyond space and time into the vulnerable realm of humans.  DRAWING NO. 8 – In the far-future colony of Punktown, inhabited by countless sentient races, an artist desperate for recognition is hired by worshipers of a god they call Ugghiutu to recreate a sacred drawing that was purposely destroyed…a commission he soon regrets. GATHERING FORCES – As Ugghiutu begins to manifest in the colony-city of Punktown, wreaking devastation, a battle-scarred band of former gang members assembles to fight back in any way possible. WUNDERWAFFE –
Colonial soldiers protect a group of aliens who hope to reverse the incursion of Ugghiutu by performing a strange ritual, their only chance to save the city called Punktown.

Jeffrey Thomas is a prolific writer of science fiction and horror, best known for his stories set in the nightmarish future city Punktown. He has been a 2003 finalist for the Bram Stoker Award (Best First Novel) for Monstrocity, and a 2008 finalist for the John W. Campbell Award for Deadstock. Thomas is also responsible for Necropolitan Press, an independent publisher in the genres of horror, science fiction, dark fantasy, and “the unclassifiable.”, which was founded in 1993.

1 – The Summoning of the Old Ones – Jeffrey Thomas (Independently published, 2019)

6 – To Her – Amber Moss (Independently published)