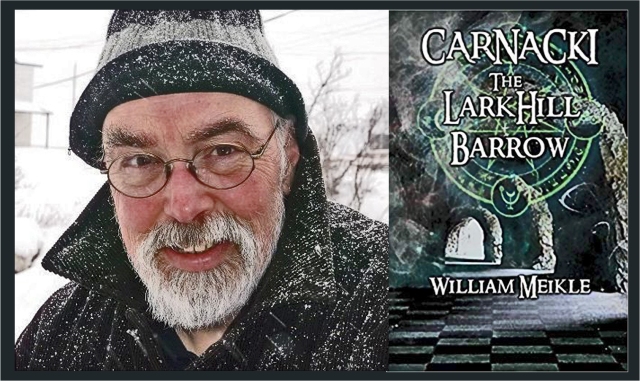 Three stories of CARNACKI: GHOSTFINDER.  THE BLOODED IKLWA – an old soldier is plagued by a vengeful spirit and a weapon that is both spectral and lethal. THE LARKHILL BARROW – an investigation in a Neolithic burial barrow leads Carnacki to experimentation with sound and vibration with almost catastrophic results. THE SISTERS OF MERCY – a soldier’s hospital needs Carnacki’s help to rid it of a spectral manifestation. These were the first three stories written the the author in 2009 and originally appeared in the chapbook box set CARNACKI: GHOSTFINDER.

William Meikle is a Scottish writer, now living in Canada, with more than thirty novels published in the genre press and over 300 short story credits in thirteen countries. He has books available from a variety of publishers including Dark Regions Press, Crossroad Press and Severed Press, and his work has appeared in a number of professional anthologies and magazines. He lives in Newfoundland with whales, bald eagles and icebergs for company. When he’s not writing he drinks beer, plays guitar, and dreams of fortune and glory.

6 – I Loved You Once – Nausicaa Twila  (CreateSpace Independent Publishing Platform, 2018)