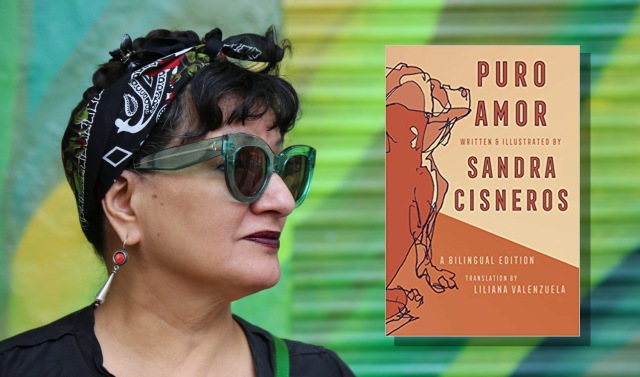 There is a fondness for animals in the story Puro Amor. “La casa azul,” the cobalt blue residence of Mister and Missus Rivera, overflows with hairless dogs, monkeys, a fawn, a “passionate” Guacamaya macaw, tarantulas, an iguana, and rescues that resemble “ancient Olmec pottery.” Missus loves the rescues most “because their eyes were filled with grief.” She takes lavish care of her husband too, a famous artist, though her neighbors insist he has eyes for other women: “He’s spoiled.” “He’s a fat toad.” She cannot reject him. ..”.because love is like that. No matter how much it bites, we enjoy and admire the scars.” Thus, the generous creatures pawing her belly, sleeping on her pillow, and “kneeling outside her door like the adoring Magi before the just-born Christ.” This beautiful chapbook is bi-lingual and contains several illustrations–line drawings by Cisneros herself.

Sandra Cisneros is a poet, short story writer, novelist, essayist, whose work explores the lives of the working-class.  Her numerous awards include NEA fellowships in both poetry and fiction, the Texas Medal of the Arts, a MacArthur Fellowship, several honorary doctorates and national and international book awards, including Chicago’s Fifth Star Award, the PEN Center USA Literary Award and the National Medal of the Arts, awarded to her by President Obama in 2016. Most recently, she received the Ford Foundation’s Art of Change Fellowship.