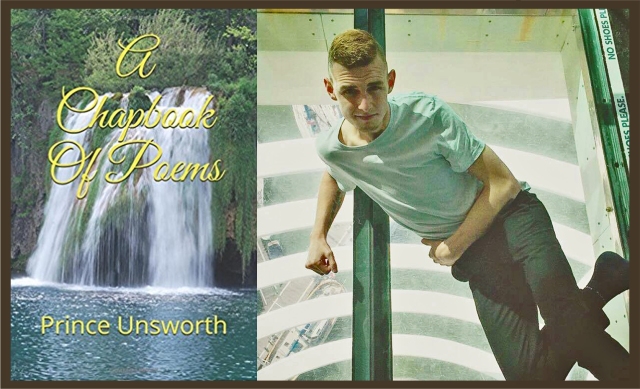 A Chapbook of Poems is a new collection of 25 compositions by Prince Unsworth,  charting a voyage through the genres of Narrative, Horror, Love and Beauty. The poems vary in theme, shape, size and form, with such titles as Give In She Waits For Me, The Proposal, and Norma  for the reader to enjoy.

Prince Unsworth was born in the historic town of Winchester in 1992, but grew up a short distance away in Eastleigh. He fell in love with reading and writing poetry whilst studying at secondary school. Struggling to cope with his parents separation, poetry gave him that real escape from life. Somewhere he could really express the feelings that bubbled deep inside. After leaving school the art of poetry was lost to him and he settled into a few different jobs. Then on the 25th of June 2009 the sad news that Michael Jackson had died led Prince to the poetry of the 20th Century’s popular balladeer. This was the catalyst for a new love affair with poetry. The seed of inspiration grew into Prince’s first published anthology in October 2017, a collection that reached the UK number 1 spot later that month.

4 (8) On The Kitchen Table From Which Everything Has Been Hastily Removed – Olena Kalytiak Davis (Hollyridge Press, July 2009)