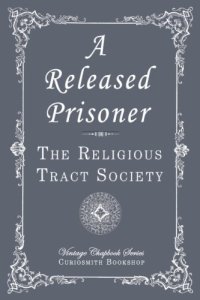 A Released Prisoner is a touching narrative of a woman who visited people in prison. A friendless criminal in a prison cell became very sick and she came to visit and became his friend. He came to life by the simple fact of knowing she was not paid to be there. She shared the gospel and he became a Christian.

The Religious Tract Society, founded 1799, 56 Paternoster Row and 65 St. Paul’s Chuchyard and 164 Piccadilly, was the original name of a major British publisher of Christian literature intended initially for evangelism, and including literature aimed at children, women, and the poor. The RTS is also notable for being the publisher of the Boy’s Own Paper, Girl’s Own Paper and The Leisure Hour. The society started by publishing tracts, but rapidly expanded their work into the production of books and periodicals. From the 1860s, the Society began publishing novels aimed at women and children, providing a platform for a new generation of women writers, including Rosa Nouchette Carey.

8 (7) On The Kitchen Table From Which Everything Has Been Hastily Removed – Olena Kalytiak Davis (Hollyridge Press, July 2009)