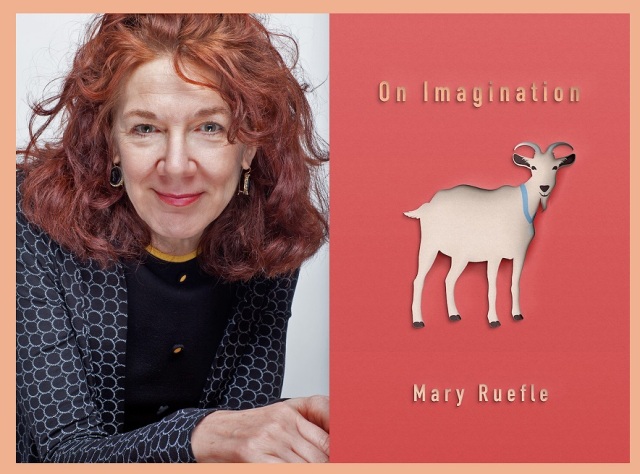 “It is impossible for me to write about the imagination; it is like asking a fish to describe the sea,” Mary Ruefle announces at the start of her essay. With wit and intellectual abandon, Ruefle draws inspiration from Wittgenstein, Shakespeare, Jesus, Steve Jobs, Johnny Cash, and Emily Dickson to explore her subject. This chapbook features original interior illustrations.

Though poet and essayist Mary Ruefle was born outside Pittsburgh, she spent her youth moving around the United States and Europe with her military family. She has written numerous books of poetry, including My Private Property (2016), Indeed I Was Pleased with the World (2007), and The Adamant (1989), which won the Iowa Poetry Prize. She is also the author of the essay collection Madness, Rack, and Honey (2012). A Little White Shadow (2006), her book of erasures—found texts in which all but a few words have been erased from the page—reveals what Publishers Weekly, in a starred review, called “haiku-like minifables, sideways aphorisms, and hauntingly perplexing koans.” Ruefle’s erasures are available to view on her website; a full-color facsimile of her erasure Incarnation of Now was published in a limited edition by See Double Press.

She has received fellowships from the National Endowment for the Arts and the Guggenheim Foundation, as well as a Whiting Writers’ Award, and an Award in Literature from the American Academy of Arts and Letters. Her work has been anthologized in Best American Poetry, Great American Prose Poems (2003), American Alphabets: 25 Contemporary Poets (2006), and The Next American Essay (2002). Ruefle has also published a collection of fiction, The Most of It (2008). She received a BA in Literature from Bennington College. She has taught at Vermont College and the University of Iowa Writers’ Workshop. She lives in Vermont.

New entries – On Imagination by Mary Ruefle (No.1), The sufferings of W. G. Being a sorrowful account of his seven years transportation by Weaver. William Green (No.3) and Pack Mentality by Kneel Downe (No.6).

3 (-) The sufferings of W. G. Being a sorrowful account of his seven years transportation – Weaver. William Green (The British Library, 18 Mar. 2010)

5 (6) On The Kitchen Table From Which Everything Has Been Hastily Removed – Olena Kalytiak Davis (Hollyridge Press, 1 July 2009)